Birth Traditions Across The World

The world is ever evolving. We once used fire to light dark caves, and now we have light in all forms, everywhere! We use to have horses pulling buggies and now we are working towards solar powered, energy efficient cars, airplanes, and boats. Even our human genomes are changing.  Through the ages of ages, we took on characteristics to evolve into our regions. People in more tropical climates evolved to have darker skin, whereas people at the polar who don’t see as much sun have much fairer skin. You get where I am going with this! We are an ever-evolving world.  Well, my specialty is childbirth. I know all the ins and outs and am passionate about bringing children into this world. Its what I know, and what I do. I have had four kids, and have had pretty amazing pregnancies and birth experiences.  However, through all my studies, what I have found is that the physical nature in which our bodies give birth has not changed a bit. The system must be perfect! Through all time, the woman’s body has remained the same for pregnancy and childbirth.  What has changed is the way culture has dealt with it these major life experiences
For my certification, I had the amazing opportunity to interview four wonderful women who have given birth in different cultures/counties other than my own here in the US.  Although the body remains unchanged, each woman’s experience differs according to where she gave birth.
Below are my conversations recorded with each woman. Rina gave birth in Africa approximately 30 years ago, and Stavroula and Lisa both gave birth in Greece between 2 and 16 years ago.

Rita: Let’s talk about my pregnancy with my son.  I lived in a very rural area. There were only 2 doctors in town neither of which was a pediatrician or gynecologist, nor was there one in a radius of 150 miles from me. I had a normal pregnancy. that went full term to 40 weeks. I did have a couple of false alarms at 38 weeks but was send home after a medical examination.  I went to a 6-bed hospital when my contractions were 3 minutes apart. I had no painkillers or an epidural. My birth process was normal. After having contractions for 5 hours I gave birth to my son with a doctor and nurse present.

Stamatoula: I had two different pregnancies due to my age. In my first pregnancy I was 28 years old, had no experience and no fear, I was enjoying my pregnancy.  In my second pregnancy, I was older, 40 years old, and was experiencing fear and anxiety about mine and the baby’s well being.

How were you treated?
Rita: I was treated very well. The staff was friendly and caring. The baby was with me all the time. I stayed 2 nights in the hospital. I had to take care of the baby on my own. The nurses will only take the baby if you need to rest or for medical reasons. They hand over responsibility asap!
Stamatoula: During my pregnancies, I was treated with love and a lot of protection. I kept working till the seventh month of my pregnancy, my female colleagues, friends, and family took care of me, especially after the seventh month, but even at the beginning of the pregnancy until the third month.
Did you follow any cultural traditions or family traditions?
Rita: I followed the cultural traditions which included a normal all natural, birth and breastfeeding.
Stamatoula: Really not. Being away from my family for a long time, and having a different education and way of living, I disconnected from many of the old traditions. During both pregnancies, my mother or sister weren’t near so I always did as my doctor said and was following his advice on any matter, on nutrition, on baby and mothers health. I wasn’t at all influenced by any superstitions  (listed below) 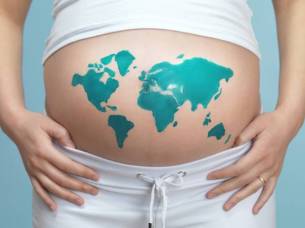 Are the traditions changing?

Rita: Natural birth was the only way or c section if necessary. Today ( 30) years later most mothers in hospitals are getting epidurals. You still have a choice but women are mostly using epidurals. The traditions changed dramatically in the last 30 years. Most children are now born in big hospital facilities. Almost all babies (with parents with insurance ) are having an ultrasound, blood tests, and epidurals. Birth centers and well-trained personnel are mostly used today.

Poor people in rural areas are still doing normal, all natural births. More of them try to go to hospitals. Most of these poor women never even saw a doctor during their pregnancy. This is real Africa!
Stamatoula: -Yes as science is more accurate with the blood, DNA exams etc. and women are educated and emancipated, tradition is not being followed for anything other than, being “romantic “ and having “fun” with all the superstitions.  They are very interesting and get you in a nice mood.
What are some traditions your mother followed when she had you?

Rita: My mother had me the same way. I was born in a small hospital in a small town. No specialists, the family doctor was the only medical person available.

Nursing was always very traditional. When the mother had problems feeding she would start bottle feeding. Today the same traditions still take place when it comes to breastfeeding, but it seems like bottle feeding is more the in – thing.
Stamatoula: -My mother, not having the education and the access to all the information we now have,  believed in all the traditions listed below of our culture and religion. Greek culture is rich in traditions, customs, and superstitions about pregnancy, birth and newborn babies. They have their roots in paganism and in the Christian religion. Some of them are still followed, depending on people’s religious beliefs, social class, education, and origin. And sometimes, just for fun!

The baby’s gender was predicted by the shape of the pregnant woman’s belly: if the belly was rather “edged”, the baby would be a boy. In the past, boys were preferred to girls because people needed extra hands to work in the fields, but also because boys would continue the family name.

In the past, it was believed that the new mother was the source of jealousy and must avoid the “evil eye”.  Therefore, she was never seen in public for forty days. After this period, she would take her baby to the church, the baby was blessed by the priest, and they could both start going out.

On the eighth day after the birth, the Fates visit the newborn and determine their future. This belief had its roots in Greek mythology.

The baby’s clothes were never washed and air-dried at night because they would attract the bad spirits. I know it’s creepy, but it’s just a superstition.

Before Christening,  the baby’s hair was never cut.  This tradition is still followed by the parents who want to have their baby baptized. The baby is also never called by his or her name before the baptism.

The name of the baby is still a big issue. Even nowadays, most babies are named after their grandparents. If the first baby is a boy, he gets the name of his grandfather’s from his father’s side.

Although breastfeeding is not a taboo, most Greek women still avoid doing that in public because they have been made to feel uncomfortable.

What do you like and dislike about the pregnancy and birth traditions in your culture?

Stamatoula: I do not reject any of our traditions from my culture because they are our people’s wisdom and ways to understand all the mysteries of life and the human body. I like them because they give us a different point of view and help us experience the previous time from our ancestor’s existence. On the other hand, I don’t think we should put the baby’s or mother health’s mental or physical health in jeopardy by following some irrational traditions.
Are these traditions more religious, cultural or practical?
Rita: For practicality, mothers breastfeed most of the time. Due to their poor living conditions, they also need to start working in a day or two so they do traditional things like keeping the babies on there backs strapped in with a blanket.
Stamatoula: I think they are all the above. Religion is always related to all the big events of Greek people’s lives, our culture is before our religion and maybe is the base of our religion.
Thank you to these awesome moms who took the time out of their busy schedules to talk with me and share their pregnancy and birth experiences with the world. It meant a lot and I loved hearing about each one!

One response to “Birth Traditions Across The World”